Now that the ashes of obliterating my former life have settled, I can’t help but chuckle at the mantra that has been on repeat in my head for the past month: “what in the hell did I just do?!”  It’s a funny phrase now and I embrace it with a sense of accomplishment. But just a few, short weeks ago, while being mentally and physically exhausted by chaos and stress, I found little solace or levity in its daily recitation. It can definitely go without saying that when taking on a challenge of this nature, the transition will always have a high percentage of failure, especially when you’re trying to create a life in a new country where you don’t speak the language. We found out almost immediately that the simplicity of normal, everyday communication had become monumental task to overcome, and was for sure something we had taken for granted our entire lives. And even after living in Logroño for a month now, there is still a level of cluelessness when it comes to communicating. However, as the typical pattern has shown so far, everything improves at a snails pace, and for a guy like me who loves quick solutions and efficiency, this has been a well-deserved knock off my high horse. I have, in typical Mike fashion, submitted to this “snail pace” while kicking and complaining, but as life has taught me many times before, being thrown into the deep end and staying afloat is the most rewarding and humbling experience ever.

One of the major tasks when arriving to Logroño was to find a piso (Spain’s version of apartment or flat.) You can read about this in more detail here. Unfortunately for us we arrived right at the start of the Rioja Wine Harvest Festival, known traditionally as the festivities of San Mateo. So as expected most everything was either shut down or functioning on a truncated time table, and with limited time at our AirB&B, this put enormous amounts of pressure on us to find housing quickly.  As most people can relate, stress has the potential to make your mind do things to your body that you wouldn’t normally do, and without notice, makes your sanity and common sense nose-dive into oblivion. Luckily for me, during any type of stressful event, I have always seemed to find a moment of clarity in which I find ways to step back, observe the situation and find ways to center myself. Now keep in mind, this has not always been the case, and knowing how I used to be—an angsty, bull-headed dust storm of knee-jerk responses—I would almost call this new mental state some sort of divine intervention!

As expected, during our tornadic first week, we were eating horrible airline food and then whatever was around and convenient. In our case, a refrigerator full of bread and tomatoes at our AirBnB, and other than the occasional wine and pinchos, this was all we consumed for the first few days. (For sure a speedy but not preferable way to lose some LB’s!). Now mind you, our location wasn’t in the expansive, barren tundra of Iceland, where one would be expected to live off gas station snacks and whatever Bonus the Pig had to offer; we were right in the heart of Logroño, Spain! Plenty of supermercados and vegetable stands are within a ten-minute walk! Eventually we decided that we should stop eating like we were living in a Soviet gulag and went shopping, thus starting our nightly dinner pattern of rice and stir fried vegetables. In my mind I felt like this helped, nutritional value not withstanding, because this was one of the very few things during the first week that I felt like I could control. 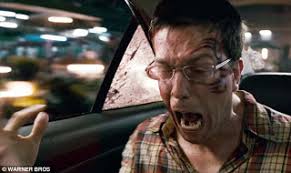 Now because we had arrived during festival week, most of our piso searching was spent in a holding pattern where we sulkingly waited around for responses from land lords and inmobilarias, who were either out of town or not at work. It was here where moral started to really deteriorate; sitting around thinking about how things didn’t work out the way you intended, or how you should have done it differently, and then creating apocalyptic scenarios of the future. During these “tragic” moments I found that just getting up and getting out of the house to be really helpful for both creating possible uncharted opportunities and to just clear the mind. It seems like an easy enough task, right? Perhaps not. During stressful times the mind, for whatever reason, seems to enjoy the curiously comfy but sullen confines of Mopeville! But sure enough, just taking a walk in the park and down streets we had not explored yet made a huge difference in our mental state. Whether it’s running, walking, dancing or the occasional car ride that calms a crying baby, there is for sure a certain magic in movement, and its benefits are invaluable. Even to this day, I still find I get hypnotized into a slumbery dream land while in a moving car…as a passenger of course!

As the days progressed our situation slowly improved, and even though we didn’t find housing before we had to check out of our B & B, we found lodging at one of the many guesthouses in Logroño, and eventually found a killer flat! There are for sure kinks to work out still, but the fiasco has been worth it. As with every insane adventure, we now only remember the good parts of this transition so far and actually laugh and joke about the “travesties” that befell us early on.